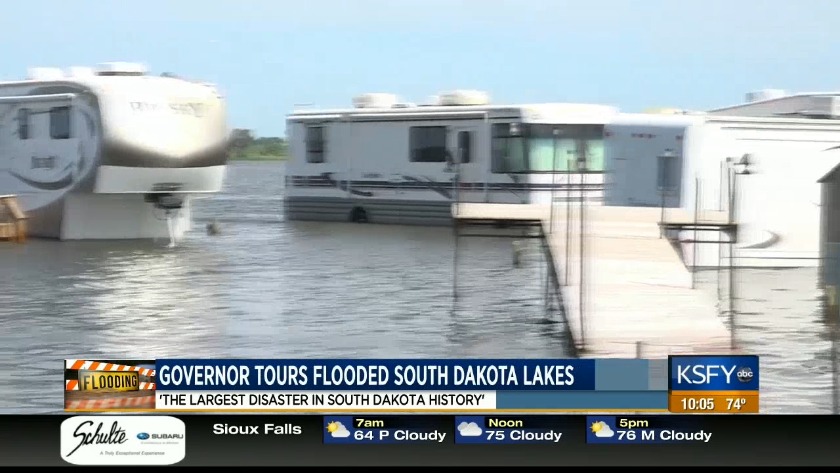 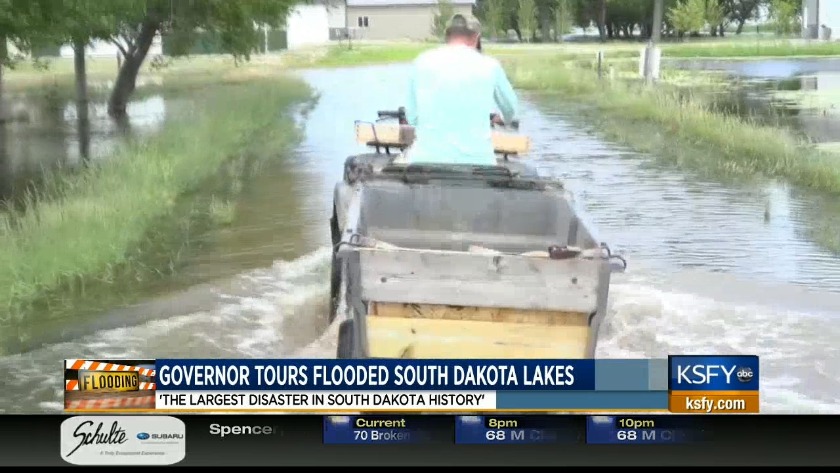 LAKE THOMPSON, S.D. (KSFY) - 2019 has been a historically tough year for South Dakotans and Governor Kristi Noem said it's something the state leaders are going to have to battle through.

Noem visited flooded areas at South Dakota lakes Saturday to see what she and her team could do to help those who have been affected by the flooding.

Noem spoke with the people who live in the area who want to see something done about these flood waters.

"Every week with the rain and stuff the lake keeps on going up, just inches up at a time," Lake Poinsett Resident, Doug Smith said.

South Dakota lakes recorded historic water levels and people are voicing their opinions to Governor Noem as she assesses the damage.

"It’s crazy to see, even think that it would happen again from 2011 to 2019 and here we are. We broke the record just last week for high water," Lake Thompson Resident, Ryan Sauter said.

At Lake Thompson, people want to see an outlet maintained so releases can be made downstream.

"We’re going to go through an engineering process, do an evaluation and get some facts to see if that is the answer we should pursue," South Dakota Governor Kristi Noem said.

"Getting to work every day, my wife’s a nurse in Brookings, and we have to drive her through the water every morning," Sauter said.

He said it makes for difficult days when they have to deal with the weather.

"I can't afford to open up an outlet too much and put everyone downstream in jeopardy of losing some of their property," Noem said.

On a boat, KSFY News Reporter Ricardo Lewis was able to see an up close view of what damage was caused. Campers have been under water since May.

"That’s what I think is most interesting about this disaster that we have in South Dakota right now. It's the largest disaster in South Dakota history and it's been going on for months now so every single community is seeing different challenges," Noem said.

"I’m trying to basically save my shoreline. It keeps on getting ate away by the high water," Smith said.

"I just trust that she'll do the best job that she can," Smith said.

"It was really nice to see Governor Noem in the area today. At least we know she cares and she wants to help," Sauter said.

"This year will not be a year where we have excessive revenues where we can fix everything all at one time, but with good planning and cooperation and everybody helping their neighbors and encouraging each other we'll get through it," Noem said.

State leaders will be working with the Water Board and FEMA to get South Dakota counties back to normal.