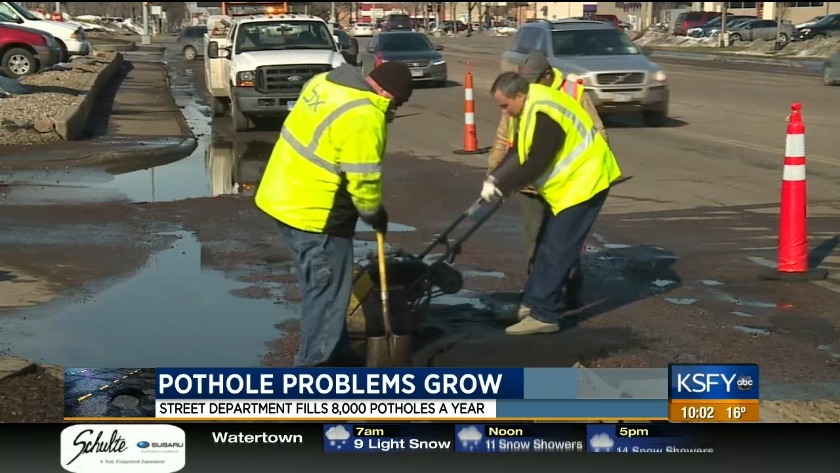 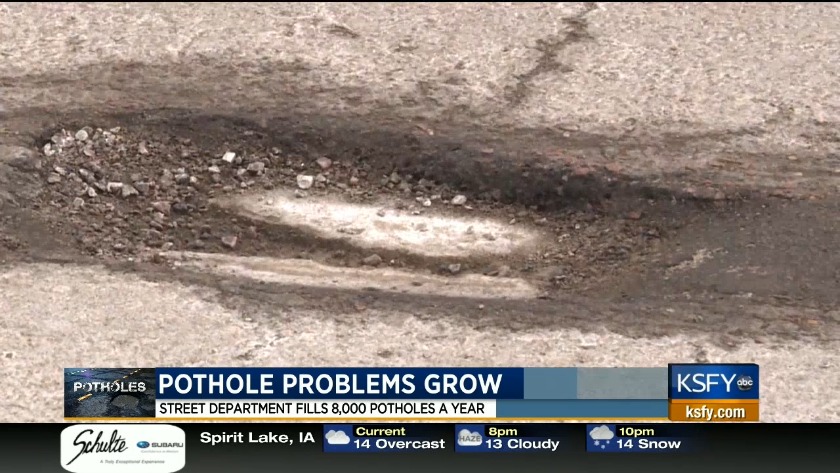 SIOUX FALLS, S.D. (KSFY) - As the temperatures continue to drop and the snow continues to fall dozens of potholes continue to settle in around Sioux Falls.

Thousands of people travel down Minnesota Avenue and 41st street every day and chances are you've come across the dreaded potholes, but what should you do if you see one?

"I mean you hit them every now and then I guess it's just something I’m use to from rural Minnesota," Driver, Hayden Tersteeg said.

A lot of those potholes that look just like this one are reported to the cities pothole hotline.

"We typically fill about 7,000 to 8,000 potholes a year typically we get 3,000 to 4,000 called in and the rest once we go out on a street if we see one we'll notice other ones and we'll get those filled as well," Sioux Falls Street Operations Manager, Dustin Hansen said.

Because of all of the snow we've been seeing the street crews are a little behind and it doesn’t help that more snow is on the way.

"We typically try to get them filled within 48 hours we are a little backlogged which is typically the case in the winter are crews are probably three to four days behind on potholes currently," Hansen said.

So what causes potholes? Hansen said all of that snow and rain gets into the cracks, gets down into the subgrade and they freeze up. The street crews use different mixes to fill the potholes depending on the season.

"We use an asphalt mix, we have a special winter mix that usually does a little bit better in the winter. The only bad part is if it's below freezing usually the retention time for those patches are only about 20 to 40 percent where in the summer time it's more of an 80 to 90 percent retention," Hansen added.

But sometimes it's hard to just drive around the pothole.

"Oh yeah, it never sounds good when you hear your pick up banging just from running through a pothole but it's better than swerving into traffic I guess," Tersteeg said.

I saw multiple cars trying to dodge potholes Saturday. Hansen said they'll have at least five crews out when conditions allow them to.

After 11 years, I-29 project in Sioux City nearly over

After 11 years, I-29 project in Sioux City nearly over