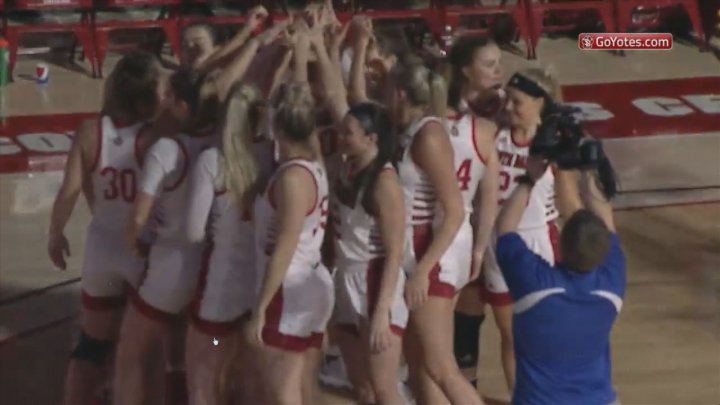 Offense comes together for USD in win at home 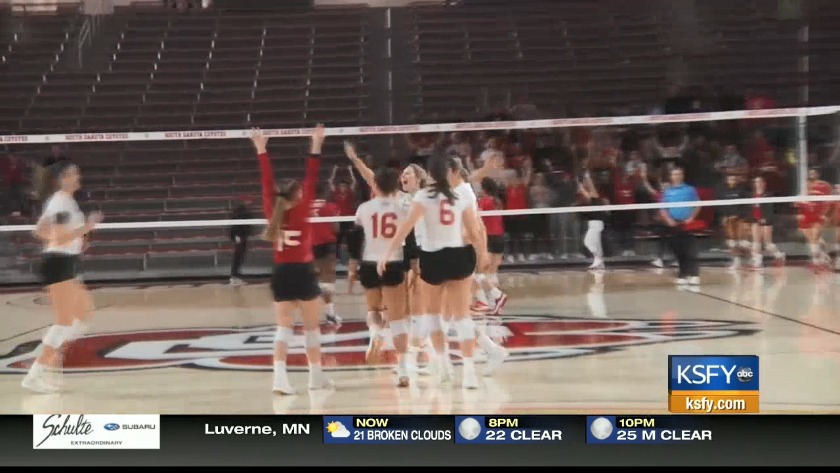 VERMILLION, S.D. – South Dakota used its most efficient offensive match of the season Friday afternoon inside the Sanford Coyote Sports Center to a 3-0 sweep over UNLV in the second round of the National Invitational Volleyball Championships.

South Dakota, winners of 16 straight home matches, including all 12 this season, will be back inside the Sanford Coyote Sports Center in the NIVC quarterfinals on Tuesday at 7 p.m.

Serving was key to the success in this match, as well as serve reserve against a strong serving team like UNLV, including Marina Hayden, a talented junior who ranks second nationally in service aces per set.

"When we do well in one category it tends to make the other categories go well and our serving was very good, but we were really good offensively," coach Leanne Williamson said. "We hit .369 as a team. We really limited our errors as a team from what we had just last night, which was a good change to see."

Hayden, who had 17 kills in the match, was limited to only one service ace after she recorded seven in the Lady Rebels first round win over Kansas City.

"I thought we did a very good job on Hayden," added Williamson. "She had one ace and it was actually a communication error, but I mean she serves the ball extremely well, so I was happy with the way we responded to it.

"I think those serves can be good for us because of the fact that we are such a good defensive team it actually ends up being more of a defensive play that a serve receive ball, we passed a couple over, but for the most part I felt like we were in pretty good control, we just had to make a little small adjustment as we went."

The Coyotes, while producing only three services aces of their own, used the strong serve to get UNLV out of system and then turn that into offensive production.

"On the flip side, we served the ball extremely well," said Williamson. "We got them out of system a lot, we made them have to change their serving patterns. We were able to set up so much better defensively and transition out of it much more effectively, but I think our serving was key to our success tonight."

Elizabeth Juhnke led a balanced South Dakota offensively attack with 16 kills. The freshman moved into seventh on the single season kills chart with 458.

Sami Slaughter and Madison Harms added eight kills apiece, Elizabeth Loschen had six and Maddie Wiedenfeld five for an offense directed by setter Madison Jurgens, who contributed 36 assists and 10 digs. Jurgens moved over 1,300 assists in a single season, just the fifth in school history to reach that mark.

Anne Rasmussen had 12 digs and Lolo Weideman nine for a defense that forced UNLV into 17 attack errors and a .228 hitting percentage in the match.

The Coyotes, with their 16th sweep of the season, will now host either UT-Arlington or Sam Houston State on Tuesday.